I Vote for the Grawlix

I’m convinced that the only reason children are given middle names is so that parents have a way of letting the child know when they are really, really, really in trouble. Who hasn’t overheard some dialog like the following:

“JJ, we keep out hands to ourselves now, don’t we.”

“Jimmy B…Are you listening to me?”

“James, I said don’t touch that, get over here now. Don’t you run away!”

“James Henry Beelzebub! You are in BIG trouble now!”

Did you notice the escalation? From everyday to formal, from easygoing to insistent?

I made the error of not giving three of my children a middle name. That middle name would have come in handy, on many an occasion. Instead, I had to employ some serious creativity to get my point across. Or make up a middle name so they’d know they were in trouble.

Some kids have more than one middle name. Does that give the parents more emphasis? Or does it give the child more chances before things ramp up to utter chaos? Just curious.

If a parent often or always used all three or more names to address their child, then that middle name wouldn’t hold any more power than a single name. The rare frequency of use is what imbues that middle name with meaning and emphasis.

In the same way, swear words lose their punch, power, meaning and impact when used too often.

Like the tale of the boy who cried wolf, swearing, if it becomes common or too frequent, or out of context, loses its efficacy.

“Oh, that’s just the way he is. He doesn’t mean anything by it,” is something often said about those who swear without thought. The only meaning conveyed is anger or thoughtlessness or lack of vocabulary.

While living in another state, we used a fantastic mechanic friend who worked on cars from his home garage. We got to know his family, his kids, his wife. Nice people. Surprisingly, he swore like a sailor, meaning, nearly every third word was a vulgarity. The first few times I spent any time around him I thought he was in a bad mood. Turned out that was just how he talked, happy, sad, angry, indifferent. That’s how he was raised. The swear words served as fillers for him, like most people use the words “uh”or “hmm” or “like” or “y’know.” It wasn’t easy to tune out or filter the sense from what he said. It was distracting and often uncomfortable. Surprisingly, he was the most tender-hearted, kind, generous person I’d met in ages. His words didn’t match who he was. Consequently, many people kept themselves from getting to know him, the real man behind the angry sounding words. What a loss.

“Your own words are the bricks and mortar of the dreams you want to realize. Your words are the greatest power you have. The words you choose and their use establish the life you experience.” – Sonia Choquette.

I admit I’m kind of a word snob. I select words with probably too much care and precision. I get told I use “big words” too much. I blame that on all the reading I’ve done over a lifetime. There are so many words to use in every possible situation! And I keep learning new ones! 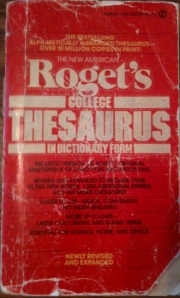 There are some words that aren’t even swear words that make me cringe; misspelled words, grammar errors, typos. That’s just me being silly and picky. A word that means something else other than what the speaker thinks what it means can make me wince. A swear word when nearly any other word would be adequate just feels lazy and pointless. Certain swear words are like a punch in the gut, a word out-of-place in a sentence, meaningless, almost silly.

That’s twenty-one word choices! Why would a person, particularly a writer, always use the same three or four words when there are twenty-one or more options? It doesn’t take a boatload of effort to look up words in a thesaurus or dictionary anymore.

Don’t get me wrong here.

I’m no purist. My mouth surely has needed a soap washing on many an occasion. Just ask MSH or my kids. When I get really, really angry half my brain cells shut down and what I say comes across as all but meaningless. I’m not proud of it. I am after all a wordsmith. I have the skills to get my ideas across without the &*#$*%#$ thrown in as empty fillers.

That string of punctuation marks that signify cussing is called a grawlix, by the way.

I like that. You’re free to fill in the blanks or let it slide. I picture Yosemite Sam grumbling under his breath as “that durn rabbit” gets away again. I get his anger without taking a hit to my gut and my sensibilities.

As for bleeping out cuss words, I’m not much of a fan of that. There isn’t much left to the imagination when lip-reading is obvious. And blanking out the middle letters of expletives doesn’t lessen the angry meaningless of the word. I guess I just wish we all tried a little harder to say what we really meant. Swear words just feel like so much anger spewed on the page, like ink splatted out of a quill pen. What a mess where there’s so much potential. I’d like to think we’re all better writers and better communicators.

I know, it’s supposedly cool and sophisticated to freely pepper our sentences with those words we wouldn’t normally use in front of our grandmother, our minister, a potential employer or small children. Why is it we don’t say them in such company, I wonder.

Do our word choices say anything at all?

2 thoughts on “I Vote for the Grawlix”