We’re gearing up for the onslaught of summer’s heat here in Phoenix. Not a fun prospect, but ways do exist to survive and thrive or at least laugh a little about it.

For instance I snapped this photo last week of a little wall lizard on the outside of my screen door. (I’m sure they have an actual name but I don’t know what it is.) 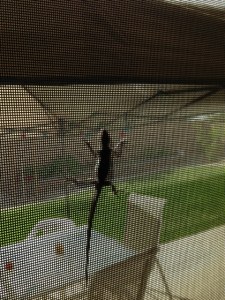 These little guys are out in force during the summer. From what I can tell they feed on crickets, mostly around the brick walls that encircle and isolate homes in the suburbs.

They don’t hold still very long. I was lucky to snap this shot at all.

My favorite thing to see them do, besides scurrying about is push ups. Yes, they do push ups a la Jack Lalanne. I’m sure it has something to do with heat regulation, or optimizing the shade their bodies create or maybe they’re just into physical fitness. I’ll try to get some video one of these days. Until then you’ll have to rely on your imagination.

The lizards are quite small. Nose to tail they’re only about five inches long.

There are, from a quick google search, approximately sixty lizard species in Arizona. As far as I can tell, I’ve seen one kind. Not so sure I want to meet any of the other kinds. A little too Jurassic Park if you ask me.

What a friendly face.

The Geico gecko sounds like a good conversationalist with some wit and snark and might be fun to do lunch with. I’m pretty sure he’s a California lizard, although his accent is tough to pinpoint. You know those Hollywood types…

Speaking of talking lizards, here’s a lizard joke for you. (Laughter is one of our ‘extreme heat’ coping mechanisms around here.)

The devout cowboy lost his favorite Bible while he was mending fences out on the range. Three weeks later, a lizard walked up to him carrying the Bible in its mouth. The cowboy couldn’t believe his eyes. He took the precious book out of the lizard’s mouth, raised his eyes heavenward and exclaimed, “It’s a miracle!” “Not really,” said the lizard. “Your name is written inside the cover.” ~ jokes4us

Did you know lizards can regrow their tails? Yup. It’s a fact. I suppose that’s handy when your tail is as long as your body and tends to drag a bit. Cats, kids and birds all want to grab at you and they’re most likely going to snatch at your tail. That’s gotta sting a bit when it snaps off. I’m sure there’s some amazing biology involved in that whole process.

Don’t try this at home.

Sometimes I wonder if my cathartic laughter isn’t actually a little maniacal. The heat here wears on a person. Just the thought of the upcoming incessant thrumming of above one hundred five degree temperatures gives me a headache and makes me thirsty.

We haven’t hit the century mark yet, so I’m getting ahead of myself. Seventeen years here and I still haven’t figured out how to do the snow bird thing. That’d be nice. Or boring. Who wants the same weather year round anyway? Oh yeah, Floridians, Californians, Arizonans. Aliens. 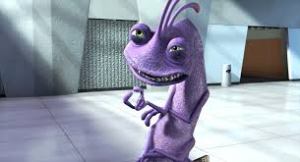 Have you ever wondered why so many aliens and monsters are depicted as lizards? Makes me go hmmmm.

I still consider myself a temporary transplant. One of these days I’m packing up and heading for a different climate. Until then, I’ll laugh a bunch and make the best of it here.

And I’ll keep a lookout for aliens, er, lizards.

One thought on “Lizard Breath”