There. I got your attention just by typing two words: Pumpkin Spice.

What a silly thing.

I feel like that person who pretends to throw a ball to a dog and laughs maniacally when the pup runs off after nothing.

Or worse, like the weather forecasters here in the Phoenix area who throw out these few words before a commercial break, “Is there rain in our forecast?” We get so excited when there’s even a ten percent chance of rain. Bump those odds up to fifty percent and we’re deliriously happy. Actual rain produces a state of nirvana and brainlessness causing people to drive into flooded washes.

So it is with Pumpkin Spice. Now that it’s September everyone goes gaga for the stuff.

Last week I could have gotten your attention with three words: Ice Bucket Challenge. But that was so last week or the week before. Now everyone’s just tired and morphing the thing to unrecognizable configurations. Cool though that it generated so much information and donations.

Maybe to take it up a notch and generate a bit more interest someone could do a Pumpkin Spice Ice Bucket Challenge. What do you say, Letterman? Kimmel? Fallon? Brangelina? POTUS?

I’ll send you a free Pumpkin Spice candle if you do. (You’ll just need to pay a small shipping and handling fee.) But totally worth it. Really. 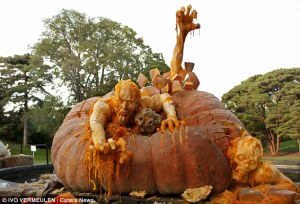 How do we know it’s not a Zombie Apocalypse disguised as pumpkin spice?

Just as a side note, I’m also not a fan of the FALL SALE especially since the temperatures are still over 105 and no way in heck am I donning boots or a scarf for at least another three months. Maybe I’m just slightly bitter that I live where there are only two seasons,”broil” and “toast.”

I do kind of miss the autumn thing, but I try not to dwell on it. That’s why all this PUMPKIN SPICE stuff is driving me crazy, you can’t not see it, hear it, smell it, read about it.

Whatever happened to apple? Yes, Apple. I wrote about that last year and you can read it here if you want a more reasonable approach to alternate fall flavors and scents, such as Apple and Caramel perhaps.

To prove that I’m not a total pumpkin Grinch, for your reading and laughing pleasure, I’ll insert a pumpkin joke (which I found here if you want to look up more.)

One day two pumpkins, who were best friends, were walking together down the street. They stepped off the curb and a speeding car came around the corner and ran one of them over. The uninjured pumpkin called 911 and helped his injured friend as best he was able. The injured pumpkin was taken to emergency at the hospital and rushed into surgery. After a long and agonizing wait, the doctor finally appeared. He told the uninjured pumpkin, “I have good news, and I have bad news. The good news is that your friend is going to pull through. The bad news is that he’s going to be a vegetable for the rest of his life”.

Great pumpkin jokes don’t seem to exist. This was the best I could manage.

If I had a phenomenal pumpkin spice recipe I’d insert it here. But, alas, I have none. Feel free to submit yours in the comment section. I can’t promise I’ll do anything with it, but you never know.

I’m hoping to go camping some time next week, in the actual mountains to get a real taste of Autumn! Maybe, just maybe, a few leaves will have considered changing colors and I’ll snap some pictures or bring home a twig or two filled with autumn hues.

In the meantime, I’m trying to block out all things Pumpkin Spice and moving on with my life in spite of such niggling little things.

On the bright side, I won’t have to shovel snow in four months! Take that, Pumpkin Spice!