It’s Gratituesday! When we first moved to Arizona we had very light, almost white carpet on the stairs just ten steps from the front door. The bedrooms and hallways also had the same impractical carpet. It was a no-brainer that we’d be one of those families. You know the ones. We became a family that didn’t wear shoes in the house. So right next to the front door a shoe pile grew.

I tried all sorts of ways to keep them organized and neat. Mostly, about once a week, everyone had to haul all their shoes to their bedroom closets and only leave one pair by the door.

The carpet still managed to get dirty.

The shoeless habit stuck with us. We’ve lived in four houses in eighteen years and shoes still come off and go on at the exit door. Not so much for the clean carpet, ours is dark beige now, but for the comfort and routine of it.

What does this have to do with gratitude today? I’m getting there.

Look closely at this photo of my wall by the front door. 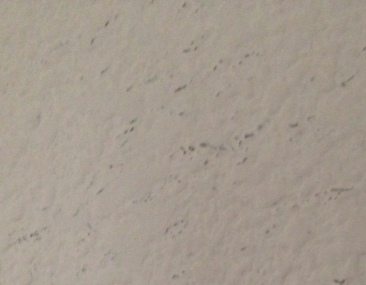 It just looks like a paint job needing repair I suppose. Or little pencil marks. We have dorky paint in this house. It was at one time a repossession by the bank and got a cheap paint job before we ended up living here.

This is the kind of paint that comes off if you take a damp sponge to it to wipe away fingerprints. Why do they even make that kind of paint?

The only way to “clean” a wall in our house is to very carefully dab at a spot and hope the paint sticks. Otherwise there’s a can of touch-up paint I use sparingly to keep the fingerprints and such at bay.

But if you look at the wall photo I pointed out, those aren’t fingerprints. Nope. I’m not even sure what to call them. Dings? Nicks? Marks?

It took a bit of thinking but I figured out what they were and how they got there.

You see, every time MSH slips his feet into his shoes by the front door, he puts his left hand on the wall to steady himself. And often, if not always, his wedding band taps, dings, or touches the wall. Given the nature of the paint it invariably leaves a mark. There’s quite a collection of the dings in a small area.

Rather than painting over them in frustration, I’ve decided to leave them there for a while as a sweet reminder of MSH’s travels to and from our home.

Honestly, sometimes I’m glad when he leaves, but I’m also really glad that he always returns. When he’s traveled for work there were weeks and months when the departures happened often and arrivals were brief and coveted.

I see those marks as the adult version of sticky fingerprints, I suppose. Every once in a while things like that get cleaned up and taken care of. But in the meantime, I’ll enjoy the ring dings. I’ll count them as a blessing, since they’re really just evidence of MSH and the thirty plus years we’ve shared.

Strange, I know. But hey, paint is cheap. 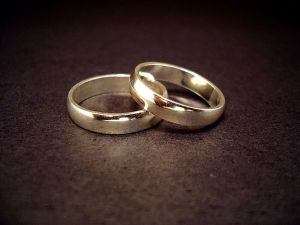 One thought on “Ring Dings”