In Search Of: Missing Groove

A friend of mine recently mentioned “getting her groove on.” That led to an interesting discussion about what that meant, which led to Googling a random movie neither of us have seen, which led to a comment by me that I thought my groove might be moldering in the washing machine.

Have you ever mopped up spilled milk with a towel and then let the towel sit for 24 hours or so? Or spilled a whole gallon of milk in the car in the summertime; oy, that’ll put you off driving for a while. 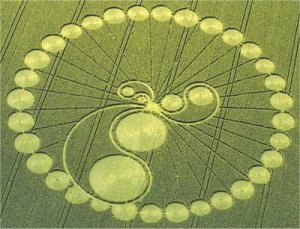 Groovy crop circle. Not my missing groove though. Photo by Cropoilbrush (Own work) [CC BY-SA 3.0], via Wikimedia Commons

So what IS a groove and how do you get it back? And in my case, how do I get rid of that smell?

Here’s a mashup of what a few of the online dictionaries said about it: “Hippie term: Taken from music, but relating it to life, social situations, and nature. Generally feeling good , in tune and in the rhythm of nature. Enjoying life. An established habit. Enjoying oneself.”

According to that definition, my groove, and my friend’s groove, have both definitely gone missing. Me in tune? Nope, I’m way off-key. In rhythm with nature? I wish.

And just so you know, Diet Coke does little to alleviate the void left by missing grooveness. Although, ice cream can briefly mimic having a groove, but once the bowl empties, that feeling dissipates quickly.

When I ride my bike pre-sunrise I feel “in the groove.” But that sensation slips away sometime before noon. Sad, I know.

Maybe music would help. Cranking those tunes (<— click it, you’ll thank me) during the day could ramp up the groove meter. A little disco never hurt anyone, right? (Don’t answer that.)

Has YOUR groove wandered off?

Possibly that lack of groove finds its roots in one or more of the following:

Not a drastic, life altering list of anti-grooveness there, but just enough of a handful of them to make things smell a bit moldy and feel off-kilter.

Your list for a missing groove certainly reads different from mine. Maybe you’re a caregiver with little respite, or a worn-out mom of toddlers, or a school teacher (bless your soul). Any one of those things right there can throw a person off track and leave them dazed and drained and with no groove.

Your list might include a hormone imbalance, or chronic pain, or living in a stress-filled situation. Maybe you’re completely clueless about why your groove got up and went. It happens.

How you find your groove might feel nearly impossible with time and energy constraints beyond your control.

Small and simple things like adding a bit of outdoor time, or hitting the gym, or a class or club you attend once a month might be completely out of reach. As would a regularly scheduled babysitter. Even making plans for something cool in your future which could light the fire under your groove and get it boiling could feel pointless. Even sneaking in a nap occasionally to revitalize your dormant groove could seem like a pipe dream.

Small moves, tiny changes, bits of brightness. Sometimes that’s where I often find my groove. Easy to overlook, and yet powerfully energizing, even if only briefly. Hearing a bird song as your walk in to work, catching a glimpse of blue sky through the window, noticing the flavor or texture of the food you’re eating,    breathing out a short amen to the sweetness of the pillow beneath your head as your finally, blessedly get to go to bed.

Maybe, just maybe, there’s more to that off-putting smell of mildew. Maybe some big repairs wait in the wings. A remodel, a mold removal service, a new roof. Meds, therapy, counseling, intervention, multiple steps, moving on or moving out, or simply hanging in there until forever or whenever. Heaven forbid that your groove goes that bad.  I know it can. Prayers for you, my friend. 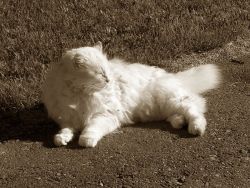 My cat was much scruffier looking than this beauty.

I adopted a stray tom cat when I was a teenager. Named him Tom. (I know!) He’d disappear for weeks and then show up battered, bloodied, matted, patches of fur missing, limping, open wounds. I’d clean him up, do my best to comb out his fur. He’d spend hours on my bed in a patch of sunlight, purring, healing, content to just be. And then a month or two later, he’d wander away again. After several years of his comings and goings he just never returned from one of his wild adventures.

I worry that my groove resembles scruffy Tom. One day it might wander off and not come back. I hope that’s not true. Not for me. Not for you.

I’m not really looking for a new groove like that animated emperor. I just want my old, comfortable one back. Sure it’s a little frayed and ratty looking, but it fits nicely and does the job when it sticks around. It likes to hum along to that Simon and Garfunkel tune “The 59th Street Bridge Song.” (Y’know, “Feeling Groovy.”)  Do you think there’s much chance I’ll find it? I sure hope so.

If you need me, I’ll be out searching.

4 thoughts on “In Search Of: Missing Groove”