While out biking a few months ago I discussed the following question with a friend of mine.

Bouncing the question around got us no where other than she had a story to tell about a friend’s husband who chose to take a steep path downhill when the rest of the group decided to carry their bikes around the obstacle. It didn’t have a very happy ending, short or long term.  I think she said he held on to the handlebars, but that didn’t have much bearing on the painful long-lasting consequences of a plain old bad decision.

I even asked my cousin, the super athlete, for her opinion and she said it didn’t really matter and that it depended. Which at the time I thought was a lame answer.

This morning I came to understand her answer. 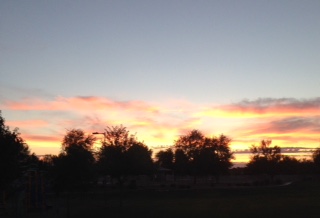 Woke up long before the sun kissed the horizon today and planned a quick six or eight mile ride to round out the weeks mileage to at least forty. I was on the trail hoping to avoid crowds. A gloriously cool morning after a 100 degree day yesterday, I reveled in my freedom and the glow of the sunrise. I was making good time, for me, and enjoying every minute of it.

Making the transition from gravel onto the sidewalk, which I’ve done hundreds of times, my wheel caught the edge and refused to pop up over and instead threw me to the ground.

It happened in this slow motion super fast way I can’t explain. It’s like being in a dream where your brain just can’t quite process what’s happening because it’s so out of the norm of your experience doing this easy thing.

What I remember most is thinking: this is my face smashing into the concrete. Everything is going to be broken and shattered and I am in deep trouble.

Here’s the answer to the title question. I had no idea where the flip the handlebars on my bike were or where my hands were.

Shock is the first thing that happens. So I just lay there. I might have rolled over on to my back. I could taste blood. And everything hurt, especially my head. I felt my face and came away with a handful of red. Oddly my glasses were still on my face. That’s how I knew my helmet saved my brain and most of my face.

I hoped someone would come along the trail but didn’t have a lot of hope for it that early on a Saturday. Lo and behold a friend of mine rolls up and says, “Hi Kami, what are you doing down there?” Or something equally hilarious if you aren’t the one on the ground. “Stan?” I said. “Am I ever glad to see you!”

He did a quick assessment and pulled me up off the trail of ants I had landed in. (Surprisingly didn’t get bit!!!)  Brushed the ants off of me, got my bike out of the way and told me to sit tight while he rode back and got his truck to drive me and my bike home.

A couple minutes later another friend happened to jog by. When she was sure I had help on the way and was okay to be alone, she suggested I use the ice in my water bottle on my face to keep the swelling down.

Another friend called a mutual dentist friend later in the morning who came by my house and made sure I hadn’t really ruined any teeth even though they hurt a bunch.

Needless to say, I felt like a crew of angels had been dispatched after I learned my lesson to not be so cocky on my bike, be more careful of transitions, and make sure MSH can hear a phone ringing if I’m going out riding alone. Oh, and the lesson to always, always, always wear my helmet.

Everything hurts everywhere almost ten hours after my fall from Grace. (Isn’t that a cute name for my bike?) I feel way worse than I look, which isn’t saying much, I suppose. My knee feels swollen, I have bruises that I can’t explain.

Oh, and the bike is okay. Some scrapes on the right side of the bike even though I fell left. The handlebars must have turned completely around to face me. I’ll get her a nice tuneup at Global Bikes next week, just to make sure I didn’t do any permanent damage. I’m not going to be riding for a week or so, I’m guessing. But I’ll be back out there again, for sure.

For today at least, I’m sucking meals out of a straw and hanging out on the couch bingewatching stuff and alternating Ibuprofen and Tylenol and icing the knee and mouth.

I’m also counting my blessings that I can still walk, and talk and laugh about all this.

So hold on. Don’t hold on. Just stay safe while having fun. 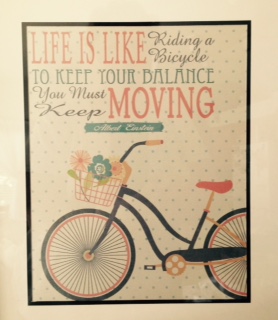 A Mother’s Day Gift from my Son and Daughter in Law. Perfect!