Friday Letter: The Traffic and Song that Never Ends

It all started with Lambchop, although I don’t remember when he began riding along with us in the car. I just know that one day we found ourselves sitting in traffic amongst a zillion other cars going nowhere and getting there at five miles per hour. More than likely, two of you, (guess which two) were arguing or whining in the back seat. No doubt the radio played nothing but the Macarena or advertisements. And most likely the AC failed in its efforts to cool our car just as summer arrived.

Whatever the circumstances, I remember putting Lambchop the finger puppet on my left hand, and letting him wildly sing his signature song whilst dancing out the window.

Here’s a reminder if you’ve forgotten that ditty:

The Song That Never Ends

One of you in the back half of the car probably slunk lower in your seat or said something profound like, “Mooooooooom!!! Stoooooooop!” or may be not. Maybe you laughed. Maybe someone in a car behind or beside us laughed.

Lambchop was a hit. I laughed. Ya’ll laughed. Tension dispelled, at least momentarily.

From then on I was on a quest for other finger puppets, which it turned out, were rare and hard to find. (Pre-Amazon and Google, y’know.) 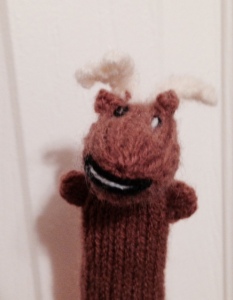 Moose, the finger puppet. Who could resist this smile?

This guy, Moose, joined our car late in the game. He liked to sing “We wish you a merry Christmoose,” if memory serves me correctly.

There may have been others, but some of our more traumatic years seem to reside in a foggy region of my brain that I’m unable, or unwilling, to access. But Lambchop, for sure, spent a ton of time on the dashboard, reminding us of the threat or the possibility of performances while stuck in traffic.

Now the most traffic I encounter happens while trying to cross Greenfield road on my bike. And of course, your father doesn’t appreciate the finely honed skills of finger puppet singing. So Lambchop now lives in the closet with all the other stuffed animals. I found Moose covered in dust next to a certain restaurant gift card on my dresser.

If you remember the names or songs of any of our other sweet car companions, remind me. Good times ought not be forgotten. In fact, perhaps they ought to experience a comeback.

Hey, whatever it takes to maintain your sanity in traffic seems like a great idea.

May all your roads lack multiple four-way stops and frequent construction zones. And may you laugh daily and often.

You know how I was always such a grouch about mother’s day? I’ve decided to give up that silly notion and move on, finally.

I don’t know about other women, but I feel like I came from the planet Venus. Not because I meet some arbitrary list of ideas that some author came up with, but because I’ve never met anyone else like me. There may be other Venusians out there, other Kami-like creatures, but I’ve yet to run into one.

What does that have to do with Mother’s Day? I suppose it’s that I’ve always felt a bit out-of-place and not in my element. I surely never felt like I fit any Mothering Mold. But I’ve come to believe that there isn’t a cookie cutter for Mothers. 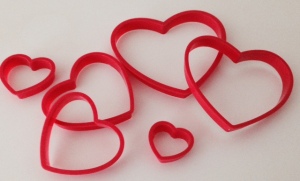 Closest cookie cutter shape to a Mom that I could find.

Mothers take on the shape that they must to meet the needs of their children. At least, most of them do. (I’ve met a few who don’t.) I tried to shape myself to your needs, not consciously, but instinctively. Whether I was ready for the job or not when each one of you came along I molded myself to fit your little fuzzy head and squalling cry. I moved and shaped my days and years to do what I could to make your life a happy one.

Naturally I fell short in that effort simply because I’m a human. And in that shortfall I often felt I’d let you down somehow. Not that I could have done things any differently than I did. I think it’s just part of life that we disappoint those we most love in spite of our very best efforts.

And that’s where my head and heart sat every May when that greeting card angst-riddled holiday of Mother’s Day rolled around. Feeling that I didn’t deserve honor or accolades or chocolates or flowers. Silly, don’t you think, that I’d hold myself to some standard of perfection? I can see now how nonsensical that was.

But having some close calls in losing my mother the past year or two made me think more about mothering. I never felt like my Mom let me down or fell short. She gave me life. She shaped me. She answered my cries in the middle of the night, cleaned up my messes, worked hard at everything she did and somehow still kept loving me in spite of stupid and hurtful choices I made. Amazing!

And that made me think about how much I love the four of you, each in a different, but intensely personal way. I’m proud of each one of you. I became who I am because of your influence and shaping and needs. I’m blessed beyond words to be your mother.

No gifts are necessary. No cards or words or hugs, either. You are my gifts, my jewels, my crowning joy.

All my love forever,

The Bluebird of Happymess