A Cat Tuner Changes his Tune

I didn’t plan this, but a year ago today I wrote this post about my Dad, the cat tuner extraordinaire. Strange, sometimes, how life circles back around.

Dad brought their cat inside the house (it’s definitely an outdoor cat) shortly after I arrived here and told me a story.

A week or two ago Dad says their cat went missing. When Lulu finally showed up her back right leg was dragging behind her and she acted out of sorts. Dad looked for obvious injuries and found none. No bleeding, no cuts, no scrapes, no missing fur. After a bit of thinking it over and talking with Mom, he decided to take the cat to the a local vet. The estimated wait time seemed too long, so Dad headed to another vet in the next town or two over who could see the cat right away.

After an exam and some tests and X-rays the vet determined the cat’s ligaments and tendons in that back leg had torn somehow. He could repair it with some surgery. After talking it over with Mom, (who is not a cat person, nor a pet person of any kind) Dad agreed to the surgery.

Who are you and what did you do with my real Dad?

So for the past week he’s been giving doses of antibiotic to Lulu and babying her like I’ve never seen before. Even Mom has let the cat sit on her lap and rubs its soft gray head until the purring vibrates some inner chord of contentment. That purr soothes Mom in return. And voila, a calmer Mom makes for a calmer Dad.

The stitches came out yesterday. The vet’s assistant commented that she’d never worked with a calmer, more well-behaved cat. No hissing, no scratching, no meowing, just Dad and Mom holding the trembling mass of fur while the stitches got snipped. 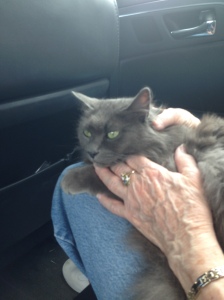 Not happy about the car ride.

The three of them make an interesting group.

It’s almost as if the cat’s injury endeared them to it and made them all feel more connected. They’ve had to slow down and become content to stay put a bit more.

I asked Dad if his cat-tuning ways had changed tune. He denied it. He said something akin to, I’ve still got plenty of other cats to tune, or something like that. He’s just a mischievous twelve-year old at heart. But he’s also become more tender-hearted this past year, more attentive to Mom, more in tune with her and what she needs. It’s as if her injuries, and consequently her dependence on him, have endeared her to him more.

And Dad’s ministrations and attention to Mom have made her more affectionate and appreciative toward him.

None of them are the same as they were a year ago. In big, drastic ways. Mostly for the better in spite of, or maybe because of, the tough road. Who would have thought?

(For Twitch, who went to kitty heaven yesterday.)