Posts Tagged With: back to basics

Take a Look at my Etchings

My grandmother kept toys for the grandkids on the attic staircase. We only got these out when the weather disagreed with our plans for outdoor play, or if the cousins, heaven forbid, weren’t around for creating adventures with.

The toys she owned weren’t like any toys we had at our house, so they kept our interest longer than most. My favorite sported a red plastic cover and two white knobs and a gray screen.

From that briefest of descriptions you might assume I favored some early version of a computer game. Not quite.

One knob moved a cursor-like dot up and down. The other knob moved the dot left and right. When the dot moved it left a line in its tiny wake. By moving the knobs I could draw a picture or a design. No colors. Just gray and black. No noises, except the background of my siblings fighting over the other toys.

I never did master the up and down, left and right twists very well.

Such a simple concept, drawing without paper and pencil. For some reason this little device resonated with children. Now, I’m sure to most people, it seems almost laughable and archaic.

Surprisingly, young children today still find it fascinating. At least some of the kids I hang out with sure do.

I had a gaggle of little boys fighting over who got to play with it during a party at my house earlier this year. These boys had a fire to roast marshmallows in, rocks to throw, water to play in and soda and snacks galore. And what did they choose to do? Watch each other draw things on the Etch-A-Sketch! I could hardly believe what I saw. 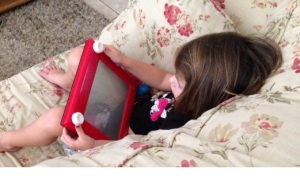 My favorite three-year old, an Angry Birds aficionado, also likes to wield the knobs from time to time. Her attention unwavering and steady as she attempts control of the elusive tiny black dot, little can lure her away.

Why such fascination with such a simple thing? This seems so strange to me.

I suppose it shouldn’t seem odd. I prefer to hold solid words printed on tangible paper bound together in a battery-free device called a book, over the electric limitations of a Kindle or other recently upgraded device. I love the feel of a pen looping and scrolling as I write sentences in cursive. A grocery list or to-do list on a slip of paper tucked inside my pocket feels secure and somehow comforting. I’d rather lift and roll an actual bowling ball than pretend to do so on a Wii. I’d rather walk outdoors than stand in place and aerobicize in air-conditioned comfort.

Call me a luddite. Call these toddlers and children the same. For whatever reason the simple and the basic seem to satisfy something in some of us.

I wonder what other ways in life I could downgrade to simple.

Rather than breathlessly waiting for the next version of the best thing ever, could I simply content myself with something classic and timeless and wonder-filled?

An experiment couldn’t hurt. We might even have some fun.