If decadence had a flavor it’d be chocolate. Don’t you agree?

You know, it is American Chocolate Week here in the United States, March 16-22. Not that I find American chocolate all that amazing, it’s not really one of our strong points. I think of it more as a holiday wherein Americans celebrate chocolate’s wonders, magic and joys. 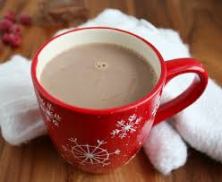 Chocolate can gentle me awake on especially groggy mornings. Hot, in a mug, with a dash of hazelnut and cream, its soothing heat penetrates and slowly shakes the Sandman’s dust from my brain. Once a daily ritual, it’s now become seldom, more special in its rarity.

I’ve experienced chocolate in a main dish, which is surprisingly not as weird as you’d think. A Mexican wonder of rich spice and complex flavors, Mole adds an interesting twist to an often overtired food genre.

Has anything escaped being dipped in chocolate? I think not.

What a messy treat!

From my earliest memories of a chocolate dipped soft serve ice-cream cone, to my more recent love affair with chocolate covered cinnamon bears, I can only conclude that everything’s better dipped in chocolate. Cookies, cake, apples, pretzels, strawberries, pineapple, caramel, nuts, cherries, marshmallows all reach their natural order of perfection when joined by chocolate. Did I mention coconut? I should have mentioned coconut. Now I have.

I suppose carrots and celery might not mix well with the creamy succulence of chocolate, but pretty much anything else ramps up a notch by pairing off with a bit of the creamy perfection of melted chocolate.

Give me a box of chocolates and I’m your friend for life. Seriously. Keep in mind that I prefer milk chocolate to dark, unless mint gets involved. A box with a map included for navigating the hidden treasures beneath the twists and twirls and peaks of chocolate gift wrapping will make my heart go all a flutter.

A chocolate factory in Phoenix creates what our family refers to as “manna,” also known as “the food of the Gods.” Cerreta’s turns the standard chocolate mint on its head by encasing a delightfully rich truffle in a blanket of green-mint-melt-in-your-hand-before-it-gets-to-your-mouth white chocolate. Oh my Hannah! You have to try one. Worth every penny you invest in them. I can make one last a good ten minutes by taking teeny bites and letting them simply sit on my tongue, becoming one with my taste buds, serenading my mouth. Another thin sliver of a bite slips over my lips, one after another, until ten minutes later, I’m finally, blissfully, practically in heaven. Mmm. One is enough for a while.

The only thing close to Cerreta’s perfection is a Lindor truffle. The centers of those playful round orbs of Swiss chocolate seem nearly liquid.  Just thinking about it makes me salivate. I figure Switzerland must be one of the happiest places on earth if it can produce such wonders and others like them.

I may need to make a chocolate run here any minute now.

Up close and personal with Texas sheet cake.

Other favorites include the infamous Texas Sheet cake, which is mostly butter with some chocolate and sugar added for good measure. I can make myself content with any chocolate enhanced slice of cheesecake. Pour some ganache on a dessert and resistance is futile.

MSH will occasionally arrive home from some errand and quietly slip a Cadbury fruit and nut bar onto my nightstand. I won’t see it until I’m tucking in for the night. Like an unexpected kiss, I feel cherished and known and cared for by such a gesture.

Sometimes the small things bring a smile, turning the corners of my mouth northward.  Sometimes it’s the sticky, lick your fingers kind of things that make me grin. Today it’s both.

Heart shaped waffles. yeah, right. Not tonight, not at this house.

Yup, waffles for dinner twice in one week.

And honestly, it seemed like something I could pull off one handed while holding a very fussy five week-old baby in the other arm.

The mother of said infant was busy entertaining an over-technologized, overly tired two year-old in the sand and on the swings. Everyone involved needed some comforting. The only way the adults might get much comfort  would be disguised in the form of food. Hence, waffles.

Oh yeah, and bacon. Gotta throw that in there. The smell of bacon cooking is enough to take the stress level down a notch or two. I think the two year-old ate most of it.

But there was no idyllic strawberry freezer jam, or lovely semi-staged photos. The adults took turns eating so the infant could be swaddled, rocked, shushed, pacified, walked, jostled and held just so.

I wouldn’t count on it, but we can hope.

In the meantime, reality trudges on.

When life throws a boatload of happy your way, you can be sure that somewhere in the distant background there’s some sad music playing. Not sure why that is. Perhaps the yin and yang have to happen. Maybe balance is a necessary element for the world not to implode. Could be that that’s just the way it is.

Whatever the weirdness of it is, I find a need for comfort food, at fairly regular intervals.

I could probably compile a list of fifty or more foods that are bad for you but that make you feel good mentally. I’m gonna stick with ten to keep it short. Ranking is completely random.

10. Homemade Macaroni and Cheese OR Fettucine Alfredo which is really just a fancier mac and cheese. We call either of these “heart attack on a plate” at our house. Mmmmmm. At least we’d die happy.

9. French fries with fry sauce. If you have to ask what fry sauce is you haven’t experienced the full glory of french fries yet. A little mayonnaise, a little ketchup, a pinch of sugar. Mix. Dip your fries in this concoction for the perfect potato, salt, oil combo. You’re taste buds will thank you.

8. Bacon! You have to say it with excitement in your voice like you’d say your best friends name after having not seen them for the entire summer. BACON!!!!! Yes! It’s a luxury item, not meant for just any old day.

7. Donuts. I used to ride my bike ten miles to get to a Winchell’s donut shop. Then I’d eat one, ride home ten miles, then eat the other one. It was worth it! Jelly filled used to be my fav. Now I crave coconut covered.

6. Cherry Coke with real maraschino cherries. 44 oz is a bit much. I can settle for 32 oz of this fizzy, cold drink. Bad for you in every possible way except mentally, well probably bad for you that way, too.

5. Toasted Cheese Sandwich. That’s a slice of bread piled with cheese, melted under the broiler. Add a tiny pat of butter for good measure. Warm and salty and gooey, great combo.

3. Brownie. Warm or cold. Frosting is preferrable but not necessary. Glass of milk required.

2. Toasted tuna fish sandwich. Pickle on the side. Sweet pickle relish is also a delectable option. Cold chocolate milk made by mixing that powdery chocolate stuff with milk. Says, “Mom loves me,” like nothing else.

I’ve always been curious about other cultures’ comfort foods. Even other regions of the U.S. What are YOUR comfort foods? Probably even more interesting is the question: Why are they your comfort foods?

Forget Comfort Foods, Try This Instead

Comfort foods.  I could wax poetic about all the varieties, textures, tastes, emotions and colors of myriad edibles.  So could you.

Have you ever considered “comfort memories?”

My son can put himself to sleep by remembering himself through a specific ski run at a specific resort.  Recalling the swoosh of the snow under his board, the bite of the cold across his cheeks, the trees as they blur past, the feel of his muscles as he moves to catch a curve and negotiates the bumps and jumps, all combine to relax and calm him into a deep and restful sleep.

Nice way to put yourself to sleep, huh? I think so.

I have a way of relaxing myself when I’m feeling ill or in pain that, if I remember to remember it, works very well to comfort and ease my body and mind. It’s rooted in how I was cared for as a child when I was sick. It’s definitely a comfort memory.

I recall pillows propped on the dark green couch, blankets tucked around me, with the TV on low and bluish across the room.  I remember the smell and taste of the concoction Mom would mix. It consisted of a bit of warm water, a spoonful of paregoric, and some sugar.  It was a licorice smell and taste, somewhat bitter, but eased by that spoonful of sugar.  My tummy always settled out if I was nauseous, my sore throat eased.  Sleep came easier in spite of noise or fever or pain.  I can still feel the coolness of the pillowcase as she turned my pillow to the cool side when my fever was high.  There would often be a cool cloth on my forehead and smoothed across my hands and arms, pulling the heat from my body and sending a swell of relaxation through my tired, aching limbs. Even if she was only checking my fever, Mom’s hand on my cheek let me feel cared for, loved and safe.

If I can conjure that image, those sensations, then I can settle into a rest that reminds me of that love.  I can relax and let the discomfort of whatever hurts lift away from me, even if only momentarily.

To know such care and comfort should fall to every child.  Every adult should be able to pull from the library of memory such a book, filled with tales of love and triumph.

What memories bring peace to you?  Is there anything you can recall from childhood, or adulthood, that on remembering, brings comfort, peace, joy, relaxation, love?