I took two of my favorite tiny people to the park several times over the past month. We usually go armed with buckets and shovels (and kleenex, just in case.)

Plans of building sandcastles and making weed, rock and sand “soup” fall by the wayside as we arrive. As soon as these two kick off their sandals they head for the swing set.

I get it. I really do. I recall a personal addiction to that sensation of forward and back and up. I remember as a child willing myself to keep sailing upward when I’d let go, imagining that with enough willpower I’d be able to fly. It’s especially thrilling when someone will “underdog” your swing and really send you rocketing, catching a little air at each extreme arc of the swing. Ah, those were amazing days.

The perfect way to spend a cool May evening.

The just-barely four-year-old decided that it’s time to finally learn to pump herself on the swing. She’s been working on it with her Dad and Mom at different times. I hoped that some particular magic that only Gramma’s possess might contribute to her success.

Sadly, no matter how many times we tried, no matter how it got explained, the idea of when and how much to lean back timed with when to lean forward just never quite jelled. I assured her that someday it would just naturally make sense, that she’d suddenly find that she’s sitting on a self-propelled swing. No need for “someone” to push her.

The last time we were at the park together, a week ago, I assured her that when I saw her again she’d have mastered the art of pumping herself on the swing. I told her that one day it would just make sense and her body would naturally move in cadence with the ebb and flow of the swinging motion. I could say that with confidence because she was moving to a new house with a swing set in the back yard. And, I wouldn’t be seeing her for at least three months.

Now it seems like I’m the one stuck on a weird new swing set unable to get the rhythm of the thing so I can enjoy the ride. That four-year-old moved way East, further east than I can drive in a day or two. Her absence, along with her Mommy and little sister and Daddy, has left me dangling. Quite frankly I don’t feel much like swinging, or doing much of anything. I feel homesick and heartsick even though they’re the ones who left.

All four of my kids are now in four different states, spread out over a radius too wide for my mothering instincts to accept. I’m not sure when we’ll all be together again. I’m extra grateful we had some family together time in Colorado a few weeks ago.

I know, I know. One of these days I’ll find myself spontaneously feeling happy and lighthearted and not weighed down with missing them. One of these days things will click and I’ll laugh without feeling slightly fake. Eventually I’ll welcome the sun’s incessant cheerful rays through the blinds instead of shutting it out and living in a shaded dark interior.

One of these days I’ll feel the swing moving me forward and back, up and out, and my legs and body will follow suit, keeping life moving in a wide arc of joy and growth.

Until then, I’ll just try to understand and accept the physics of life’s forward momentum.

I keep thinking about what little clingons you were.

You all know I’m not talking about the Star Trek alien race. Although sometimes it did feel like I had an alien life form(s) attached to my body on a semi-permanent basis. Such clingy kids, you hated being out of sight or out of touch from me for any amount of time.

Trying to do aerobics in front of the twelve-inch black and white TV seemed like an exercise in futility more than an effort to get my heart rate up for a specific amount of time. Either I’d have a kid holding to one of my legs while I attempted to run or jump in place, or I’d have two kids crying while trying to escape the kitchen chair fence I’d created to keep you away from me for twenty-eight precious minutes.

Even funnier was attempting to get a workout done on the mini-trampoline. Remember that thing? You all spent more time “working out” on it than I ever did.

Playing softball with a women’s league seemed an innocent enough pastime. Other kids played on the sidelines and behind the backstop while their mothers batted, threw, caught and ran. But no, J and J, my two oldest and mostly independent kids, you stood there, fingers wrapped around the chain link fence sobbing uncontrollably as I tried to bat. You screamed in unison as I took to the outfield. You were only happy if I sat waiting for my turn at bat. Then, of course, you’d play with the other kids.

Did I do something to make you think I’d abandon you if I were more than five feet away with a clear path between us? Or was I just so irresistible that you couldn’t bear being apart from me? I hope you didn’t feel I was somehow pushing you away. Maybe that’s just normal behavior. I had no idea what normal was.

Maybe I was ahead of my time. Was I practicing attachment parenting without intentionally trying to? 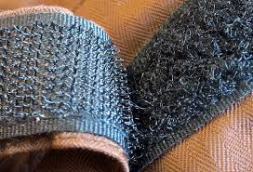 And then my second set of kidlets…ah, my little velcro babies. You were always attached at the hip. For.Ev.Er. Nonstop. Day in and day out.

I’m not sure why you found me so indispensable. A food source, sure. But beyond that, I’m certain I’d never heard of children being quite so attached as the two of you. Detaching your little warm bodies from me felt very much like separating velcro from itself. I swear I could even hear that familiar ripping sound of millions of little hooks and loops pull away from each other whenever I tried to set you down somewhere.

To this day I still sleep on the very edge of the kingsized bed. A habit I got into when Little L couldn’t sleep unless some part of her was touching some part of me. So I compromised and let my arm dangle down to the mattress on the floor where you slept. You calmed and settled in for a restful sleep as long as you felt my touch, all night long. 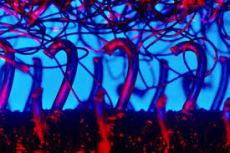 Microscopic view of Velcro. Looks kind of like an alien life form…

I wonder how I survived all those early years of constant companionship, constant touching, constant needing.

I also wonder if I could have given you something more.

Here’s the ironic thing. It’s all reversed now. I miss you when you’re gone, want to hang out longer than I should when I’m with you, can’t seem to get enough of your smiles, conversation, hugs and friendship.

If I start acting like an alien or seem overly attached, just tell me and I’ll back off.

I sure love you!