An In-Law with a Dance in His Step

MSH’s mom remarried about thirty years ago. Thing is she married a rancher. Everyone thought she was crazy heading off from a life in California to help raise the last half of a Wyoming cattleman’s children and run a household. 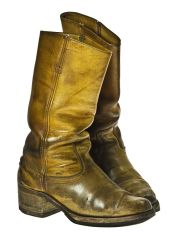 By Nikodem Nijaki (Own work) [CC BY-SA 3.0] via Wikimedia Commons

My kids always called him Grandpa. They didn’t care about family politics or the ins and outs and etiquette of widowers or divorced people. My kids only knew they felt loved from both of those people on the ranch, as well as the aunts and uncles and cousins they rubbed shoulders with. My son especially loved spending time up there. I suspect Grandma’s “good groceries” had something to do with it. I think getting the chance to ride motorcycles, drive trucks and tractors at a really early age, and generally spending the day outdoors and getting dirty kind of endeared him to Grandpa.

Grandpa showed equal attention to all the children and grandchildren and made no distinction whatsoever between his or hers especially when it came to grandkids. He capacity to love seems infinite.

I still remember him holding each of my girls on his knee and telling them stories and nursery rhymes. His favorite one he recently recited to a great-granddaughter. You have to read it closely or you’ll miss the subtle nuances.

to get her poor daughter a dress.

When she got there, the cupboard was bare,

and so was her daughter, I guess.

He has the most innocent and yet mischievous twinkle in his eye when he ends that rhyme.

What a marvelous sense of humor! I suppose you have to have a capacity for laughter if you live the life of a rancher. The whimsical humor of weather, insects, and markets could leave a person in a sour state of mind more often than not. He’s got the sweetest disposition you could imagine.

He loves to dance and can hardly sit still if a good dance tune starts playing. I’m pretty sure that’s how he charmed my mother-in-law into marrying him.

By Cgoodwin (Own work) via Wikimedia Commons

His family, one of the first homesteaders in the valley they live in, raised eggs when he was a boy, dairy cows when he got older. He moved on to beef cattle after the dairy cows nearly wore him out. He’s seen his share of setbacks, heavy sorrows, challenges, health problems and heartaches. And yet, at eighty-one he gets restless in the winter without enough work outdoors to keep him busy.

Once spring starts thinking about appearing and the calving starts, he’s an energized, sunup to way past sundown ball of energy. I think he can outwork an eighteen year old.

I’ve never met a friendlier person either. When they visit us here, I swear he sees more people he knows than I do. He says he’s never met a stranger because he always introduces himself and gets to know a person right off. He has a kind heart to go with that friendlier demeanor, too.

Oh, my! Saints have nothing on him for the patience he has. But if you do something mean-hearted or downright wrong you’d better be prepared for an argument you won’t win. Rancher’s aren’t people to mess with.

In all his spare winter time he used to coach wrestling at the local high school as a volunteer. He changed lots of lives for the better that way. You could ask almost anyone who’s known him what a good man he is and what a difference he’s made in their community. They’ll back me up.

Grandpa might be short in stature, but he’s got the character of a giant. He’s one of the most valiant men I’ve ever known. What an honor and a blessing to know him and to count myself as family with him.

Thank you, Gary! You’re a bright spot of sunshine in the world!

“If you get to thinking you’re a person of some influence, try ordering somebody else’s dog around.” ~ Will Rogers