Wild Ones and Volunteers 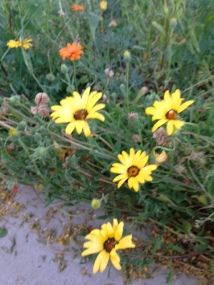 My wildflowers reach the end of their life cycle this month. MSH keeps insisting I just need to water them. To appease him, I have drenched the poor worn out plants with copious amounts of the precious resource, to no avail. Well, that’s not exactly true. The weeds appreciate the extra moisture and show their appreciation by growing a foot in a day, or at least it seems they do.

No, sad to say, my wildflowers have simply reached the stage in their life cycle where they produce seeds and then let the winds scatter their progeny willy-nilly. By time a healthy seed head appears, the plant itself has given its all, nearly five months from peeking out of the ground to now.

Now’s the part of the wildflower process where the hard work kicks in. If I want to share any of the seeds, which I like to, then I gather the puffs of seed heads into a bucket and distribute them into Ziploc bags. These little guys, African Daisies, will grow in almost any climate, even in a regular garden bed during late spring and summer, as long as they get the full sun.

It’s a little trickier gathering the California Poppy seeds. They form in long pods after the flower bloom ends. The seeds aren’t much bigger than a grain of sand. I gather the pods before they open and let them dry out in a container. When the seeds are ready the pod splits open on its own and releases the seeds where they fall to the bottom of the container.

The other much harder part of wildflowering in my rock covered desert landscape is that every plant must be plucked from the ground and disposed of. Usually I pull a few plants a day as they slowly die off, which isn’t too difficult. But this year, there are more plants than ever and we had a really hot patch of weather last week that sped up the process of end of life.

So I’m faced today with the task of cleaning up the dead and dying. It’s a little sad. The yard starts to look bare and desert-ish again. My flowerpots in the shade of the front porch provide my only color fix out there.

Yet in this undertaking (excuse the pun) I have hope, because hundreds or probably more like thousands, of seeds have fallen among the rocks and next years bloom looks promising.

I suppose what I love about wildflowers lies in their self-propagating properties. They voluntarily show up, without any work on my part.

“a volunteer is a plant that grows on its own, rather than being deliberately planted by a farmer or a gardener.” ~ Wikipedia

I once had a tree seed blow in and grow in the middle of a series of garden beds. Turns out it was a Brazilian Pepper Tree that grew very quickly. In a matter of three years I had a tall, full tree that provided shade for a south-facing kitchen window. Another time, in the middle of a compost pile, I had a cantaloupe vine grow that gave out the sweetest fruit I’d ever tasted. 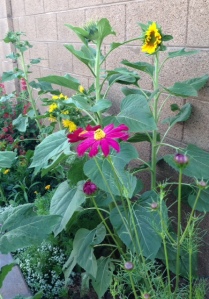 Unplanned color in my garden.

All winter I had meant to plant vegetable seeds in the open spaces of my back yard flower bed; combine utility with beauty for a perfect combination. I set in a few tomato plants, but that’s all. The deliberate planting never happened. Life and death and illness took hold for a while and got in the way of my good intentions.

And yet, almost miraculously, my back yard flowerbed overflows with nearly all volunteers this spring. Some flowers simply survived the very mild winter, with only one night of below freezing temperatures covered by a sheet. The red Penstemon apparently throw out seeds because they’re spreading and blooming proficiently. A few Sunflower seeds planted themselves from last years batch and have made themselves comfy among the Romaine lettuce and Petunias. Marigolds reseeded themselves as well and threaten a yellow takeover once they start blooming. And Cosmos, with their feathery stalks have already flowered in neon pink, the children of last years few seeds I tried for the first time.

Looking out the back window provides a view of this unplanned but stunning flowerbed at all times of the day.

Not being in too much of a gardening disposition this past winter, I’ve been lucky to have so many plants volunteer to brighten my life. Sometimes, in spite of lack of attention, or maybe because of it, nature sends surprises to delight and lift and cheer.

October is spring time for me and I don’t live in the Southern hemisphere.

I grew up with four seasons. The traditional ones. Winter, Spring, Summer, Fall. Three months, more or less, of each. Winter was the brutal months. Walking to the bus in the near blizzard conditions made me question my desire for an education. The first few weeks of sledding and tubing and snowman construction got old quickly when the snow melted and pooled around my toes in galoshes. I did not like the cold. I still don’t.

Because of the southwestern desert heat during the summer months of April through September, I stay inside with air-conditioning keeping me cool and sane. Sure, I venture outdoors in the early morning hours before the sun comes up, and after the sun goes down. When the sun’s visible, I try to avoid being out there. It’s brutal. One hundred ten, one hundred fifteen, and that’s in the shade. I get cabin fever stuck inside so much.

If we had a pool I’d be out there more, but that’s a luxury, even here.

By time the temperatures drop below a hundred and the evenings cool into the seventies I feel like a bear that’s been hibernating all winter. Finally, I get to go outdoors, breathing unprocessed air, walking, biking, gardening, swinging kids at the park, picnicking, hiking, living.

I often and mistakenly call the fall months springtime here. Weird, but that’s how my brain processes finally being able to escape the indoors.

I just spent four hours outdoors overseeding my winter lawn with rye grass seed in my backyard. If I don’t do this the cooler temperatures force the Bermuda grass into hibernation mode and I look out on three hundred square feet of dead looking grass until April. It’s not much fun to play on or lie on, or walk barefoot in. Not to mention the dead stuff gets tracked into the house and makes a mess. So, environmentally irresponsible or no, I scalp the lawn, spread the perennial  rye  grass seed, layer on the topping mulch or, (gross) steer manure, and then water faithfully three or four times a day for a week or so.

The end result?  A lush, living, breathing carpet of green as a foreground to my raised vegetable and flower beds.

While spreading the dirt over the freshly scattered tiny seeds, I thought of all the seeds I’ve planted over the years. Vegetables, flowers, grass. Some grew and some didn’t. Some shot up tiny seedlings and then died off. And some took off and grew into incredible plants with a yield that would do any master gardener proud. I just never know what results to expect. 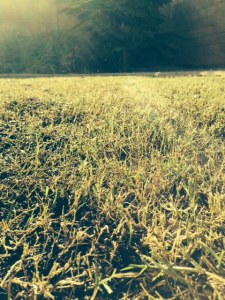 I’ve put effort into things I thought would produce happiness and satisfaction. I’ve spent time with people I believed I could help or who needed what I had to offer. The various seeds I’ve planted boggle my mind if I think about it much.

And just like the vegetables, flowers and grass, some of my seeds have done nothing. Some looked promising and then died off. And some became a rich and stunning plant that gave back more than I ever put in.

I’m afraid I might have planted too much meaning and hope among my grass seed today. I get a little antsy when I do that. Putting myself into something scares me every time. Over-investing myself in anything feels particularly risky.

I throw the seed out there. I water, I fertilize and I hope.