It’s All In How You Look at It

Earlier today I found myself once again deleting photos off my phone to make room for a boatload more photos I plan to take soon. Yes, I backed them all up to a different spot and ought to be able to just delete them all at once, (if I could only figure out how.) But I like having a “few” snaps available to look through and share without  diving into my storage facility and hunting for what I want. So I’m selectively deleting. 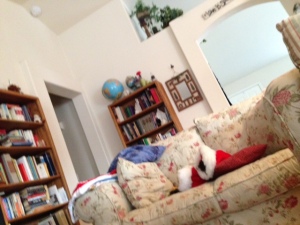 Santa left his hat on the couch and the world is slipping.

I’ve gone through the “stack” of photographs at least four times in the past month or two. A few more achieve nirvana and move on to their next incarnation as electrical impulses and ones and zeros. But more stay on the phone, taking up valuable memory.

I ran across this series of photos I’d forgotten about.

An open Sandra Boyton board book in the foreground.

Yup, they’re from Christmas 2014 or thereabouts. I figured since today’s a national holiday (Independence Day in the US) I can post a holiday themed set of photos if I want to.

I didn’t take these particular photos. My favorite then-three-year-old took the shots. 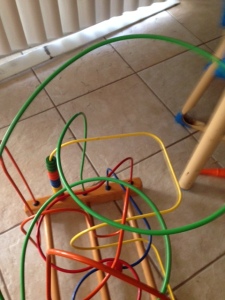 Wire bead maze: a child’s up close point of view.

You kind of get the drift that she’s short. For her age she’s in the 95th percentlie for height. But compared to adults, her view on the world sits a couple of feet lower.

Huggy Bear, Tissues, Flat Screen. What is she saying here?

Don’t get me wrong. I’m not saying there’s a photography genius waiting to blossom here, at least not that I know of. She does, like most kids born in the past ten years, seem to have an innate sense of how to run electronic gadgets and make use of them faster, better and more creatively than big people do.

There’s something in her viewpoint I can’t quite put words to. I just know I like it. 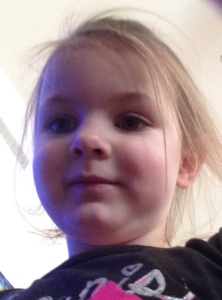 I especially like her non-posing selfie. Usually she puts on her photo face if she knows her picture’s being taken. You can almost see her thinking here. I like that.

Book closeup. Very introspective, or something.

Plenty of blurred photos got the garbage can button. And fifteen or more shots of the carpet likewise bit the dust. And eight of just her forehead had to be obliviated. (Yes, I just made up that word: oblivious got verbed.)

I figure you have to crack a lot of eggs to get a few good photos, or push a lot of buttons to make cake, or something like that. Right?

Looking at life from a kid’s point of view isn’t easy. Our adult eyes and our size get in the way. In fact, looking at things through the lens of other people’s eyes proves difficult in the best of circumstances.

What a great reminder from a child.

I think I’ll try looking up, or sideways, more often. You never know what you might see.

I wrote this post on Tuesday. Specifically for Gratituesday. And then I couldn’t make myself finish it, or push the publish button. I suppose because it’s the kind of irritating writing I don’t like to read, especially when my day-to-day life seems composed of nothing but uphill struggles and crap to muck through.

Let’s be honest here, shall we?

It’s not always easy to see past difficulties and troubles in life and count blessings or feel grateful. Why is that? Lack of perspective? Lack of sleep? Lack of understanding?

The inability to feel gratitude, to notice and appreciate the good and great things about my life occasionally overtakes me and then I feel miserable.

And then sometimes on Tuesdays I struggle to find something I feel grateful for. And then I feel ashamed that I could feel that way. 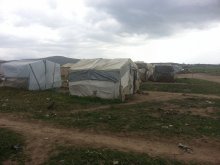 One tiny spot on the planet where poverty thrives.

By any measure, particularly on a global scale, my life is one of riches, comfort, ease, wonders and glorious blessings. Even the poorest person in my city is better off than most of the world. Compared to eighty percent of the people on this planet I am a wealthy person.

Maybe I need to convince myself when I’m having a bad day, when the bills pile up, when the troubles I face feel extra daunting. If that’s the case maybe I should look at what’s missing and what’s not missing in my life.

All of that reads like fairly basic, and almost silly stuff that just seems commonplace and ordinary. It’s only basic in some limited parts of the world, and even then only in some parts of some cities. The whole world isn’t like where I live and work and play and write. Hardly. I live in a utopia, a wonderland, a bubble.

I cringe when I hear such isolated and naïve talk.

To those who think such thoughts I say this:

Drop by a food pantry sometime. Volunteer for a day or two. Talk to a few of the people who come in for help. Open your eyes.

Google this term: “Countries at War.” Enjoy that reading. Or look up “Global Poverty” then look around you. Want a more realistic comparison? Then just ask your search engine to look at  “Poverty in the U.S.”

Sometimes we just don’t see the gloriously green forest all around us because the tree we’re banging our sad little head on gets in the way of our view. I’m one of those most guilty of such behavior.

Blessed beyond measure. That’s me!

Grateful for it all? You’re dang right!

I hope your view turns out as spectacular or better than mine.

“May our effort, confidence and concern for others be the altar from which we pray for personal abundance.” ~Laura Teresa Marquez

A Bit of Perspective on Kissing and Other Stuff

It’s that time of year where half the world seems to lose all perspective.

“These are not a list of regrets,” she was quick to assure me. “I have no regrets!” She gave me that look that said she was seriously completely honest about that statement. “No regrets!”

That’s true. She has used these past few nauseated chemofied pain-managed years making sure there would be no regrets that she had control over.

But there is this short list of ‘would have if she could have’ that I wrote down as we talked, with her permission of course.

I noticed the “more” she wished for wasn’t something that could be put in a package, wrapped up and tied with a bow then slid under a Christmas Tree. The “more” wasn’t something she could send someone on an errand last-minute to take care of.

It’s so easy to let the minor things take over and get major league treatment. Meanwhile The Really Important People and events end up forgotten, rolling and banging around in the cargo area.

Maybe I ought to start doing something about my regret list now, while I have time. At least, I think I have time.

We never know, do we?

My first job as a teenager, aside from babysitting, was at McDonald’s.  I learned a heckuva lot at that job, and not just about work ethic or stuff like that. I learned to appreciate what it’s like behind that counter trying to work with a diverse and strange group of people. I recognized that turning over the running of a restaurant to a group of teens and twenties had potential for disaster as well as for leadership and growth.

We used a preprinted pad of paper for the orders. A customer would tell us what they wanted and we’d write as fast as we could, then figure out the math on the paper, then key in the total on the cash register. Sounds so archaic now, doesn’t it? Seriously, it wasn’t that many years ago. Some places still do it that way, amazingly. (The fabric store I worked at ten years ago did it that way, too.) I’m not sure how the till ever balanced out at the end of the day using that method. Boggles my mind.

I used to take great pride in my ability to figure out change. Nothing quite matched the satisfaction of reverse counting in my head and then forward counting the customer’s change into their hand. Occasionally, I’d catch myself in an error as I counted it out to them. I’d apologize and make the correction, glad for the process that double checked my math.

Even now, when I make a purchase using cash I have the change figured out almost before the computerized cash register does. And I double-check the money in my hand since the cashiers rarely do that counting back thing anymore. In fact, I’m not sure most of them even understand that concept or could figure the change without looking at what the computer tells them.

So why would I bring this up today?

I’m talking around a topic I don’t want to address directly.

Making change in the monetary sense is easy. Always has been.

Making change in my life. Not so much.

Yes, this is an actual cash register. (Photo credit: tarale)

It’s Monday and I just had one of those weeks where every flaw I possess seemed highlighted by neon markers and flashing red and blue lights in the rearview mirror. I’m not just talking physical flaws, but also bad habits, misplaced priorities, skewed ideas, and misaligned ways of thinking. I found myself wondering how often I justify dumb decisions and behavior with little lies I tell myself.

Went to bed last night weighed down by it all.

Woke up this morning determined to do something about it.

Maybe I need to slow down and figure out the balance owing and what change is due. Y’know, get a handle on things. Stop acting like an emotional tornado.

It’s tough to be objective about your own life. It’s easy to see all the crap and garbage and think that’s reality. Others see only what you allow them to see and you know they just don’t really know the real you. I know that somewhere between the two perspectives reality sits, waiting for me to acknowledge it and get my groove on.

Does reverse counting change exist for making change in my life? Can I forward count the change somehow to see my way out of the weighed down math-challenged thinking I’m stuck in?

It’s awfully tempting right now to swing by that drive-up window and get an order of fries and a coke. Throw in a Big Mac while I’m at it. Throw in an apple pie, make that two because they’re cheaper that way. Eat away my sorrows. Forget the math. Tell the cashier to keep the change.

Today I keep the change and the whole wad of cash. Today I begin to make change happen.