The Seven Levels of Dante’s Quilting

Have I ever mentioned crafts on this blog?

I DESPISE, okay maybe that’s too strong of a word, I highly dislike, crafting. Participating in, if I’m more  precise.

I am currently in the middle of a ginormous CRAFT FAIL of epic dimensions.

If you haven’t, just don’t. You’re life will thank you for it.

Okay, maybe it isn’t technically a craft. Yes, yes, it is. It’s something that requires the PINTEREST gene. Born in the last century, I am sadly lacking in this apparently critical gene segment in my DNA.

If these quilt frames weren’t borrowed they would have been part of a ritual burning in my backyard during the past several hours of insanity and aggravation.

Apparently, as I found out last week with my daughter, putting a quilt on a frame requires at the minimum, two people. Sixteen would be better. Twenty might make it turn out well.

Four people need to stand at the north, south, west and east fung shui points in the room in which the quilt resides. Four people must stand equal distance apart chanting the kumbayarowtheboatashore chant. Four more people need to summon the craft powers of the underworld to levitate fabric, batting, fabric, quilt frames and quilt stands. Four more are helpful if they don’t mind getting stabbed by giant thumbtacks whilst they attempt to pin, simultaneously or laboriously one at a time, all three layers of said quilt to levitated boards. 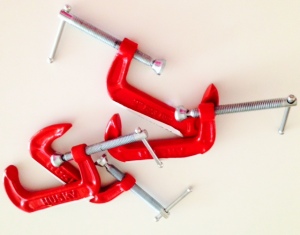 These C-clamps look like torture devices for good reason.

My daughter and I managed to do this with only two people last week. I’m not sure how. There must have been quilting angels standing guard. After only two hours of wrestling wood, fabric, tacks, clamps and bad words we finally managed to have to quilt suspended midair. Ten minutes later we had finished tying the quilt together. An hour after that we had disassembled the contraption and sworn off quilting for the rest of our unnatural lives.

That is until my quilt top was ready for quilting. Which it has been for the past four years and one week. I’ve put it off. For good reason, obviously.

Today, I thought I’d attempt putting the quilt on the frame all by myself.

Yes, you read that correctly. Alone. One single person.

Cute, yes. Innocent, no. Don’t be fooled by the folksy denim look of this monstrosity.

I reasoned I am an intelligent, well read individual. Besides, I googled it. I’d just done the deed last week. How hard could it be? It’s just fabric and wood. I’m a grown up with skills, talents, logic and some patience.

If I ever think I might make another quilt top, please stop me if I suggest I might want to. But if I succeeded somehow in creating one, I would do everything in my power to allow someone else the privilege of machine quilting it. I’d sell plasma, collect beer bottles, play the violin on a street corner collecting change, whatever it took, to pay for someone else to finish the danged thing for me.

I must be insane.

If I wasn’t before this, I surely am now.