Woke to the sounds of rain this morning. Second only to the hush and muffle of snowfall, rain makes me want to put on my raincoat, grab an umbrella and get outside.

Given than I think of this place as my Riparian Preserve, I loved that the place appeared abandoned when I arrived. I didn’t cross paths with a single person until the last five minutes. A photographer with a tripod making his way toward some wonderful scenery to shoot seemed a bit put off by seeing another human, as was I. We successfully ignored the existence of each other and went our separate routes.

How can I possibly describe the scene today? The diffused light through low clouds muted and highlighted colors. Today’s cloud filtered light particularly played up the yellows and enhanced the grayish brown of everything else. Greens, of course, seemed greener, but golds sang out in the rain-light like a soprano in a choir.

Don’t take my words for it. They’re inadequate today. Stroll along with me, imagining the sound and feel of rain on your raincoat and the not particularly cold water seeping through to your wool socks. 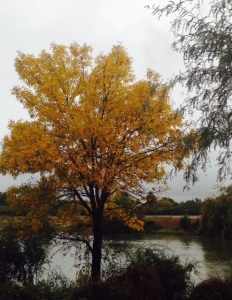 Today’s stand-in for the sun.

Here in the desert autumn isn’t. We don’t really get to experience that particular season. At best we usually get a hard freeze for a night or two in late December or January which turns the deciduous leaves dark brown and drops them to the ground a day later. Nothing pretty about that. But this year serves as a delicious exception. Lows in the high thirties and low forties have kissed the leaves and made them blush red or brighten to a golden hue. 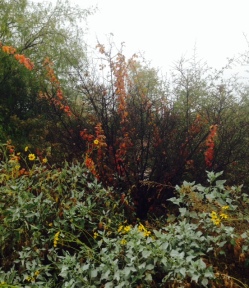 A spray of reddish-orange. 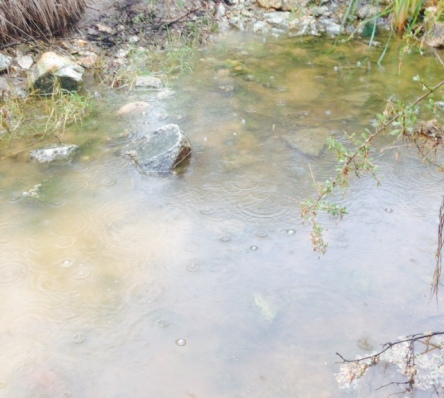 Bubbles pop to the surface when raindrops his the water. 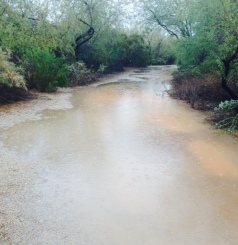 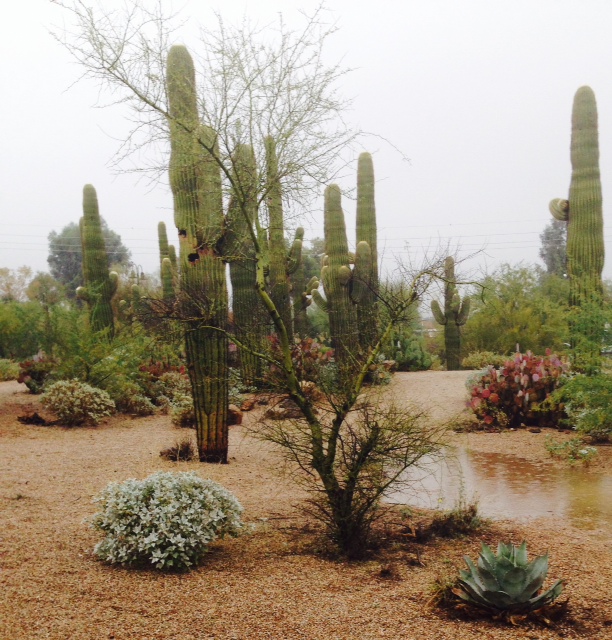 Sahuaros drinking in the rainy day.

Most of the water birds stayed quieter than usual today. I’m not sure what’s up with that. Why would rain shush them? The ducks stayed tucked in, beaks nestled under a wing while they sat or floated quietly. The night herons seemed more stoic than normal not flying off when I approached. Jumpy best describes a few of the shore birds, as if they don’t know how to behave when it rains. Not a hummingbird or yellow finch in sight, snuggled up inside their tight little nests, I’m sure. 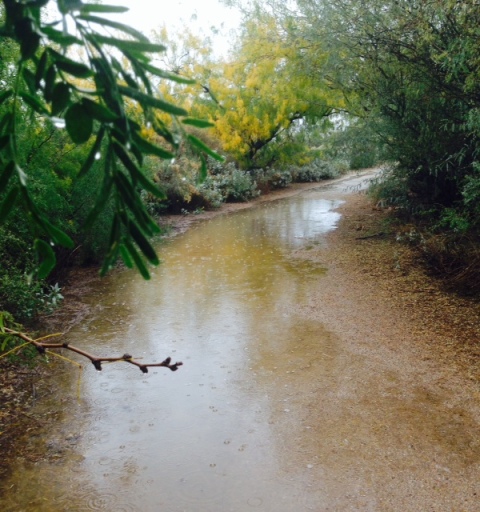 Toes and feet will definitely end up wet.

Wish I could peek inside this nest. 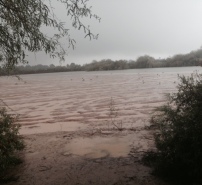 The closet thing we get to a beach view around here. 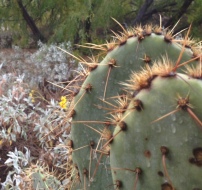 Water droplets on prickly pear, quite the contrast. 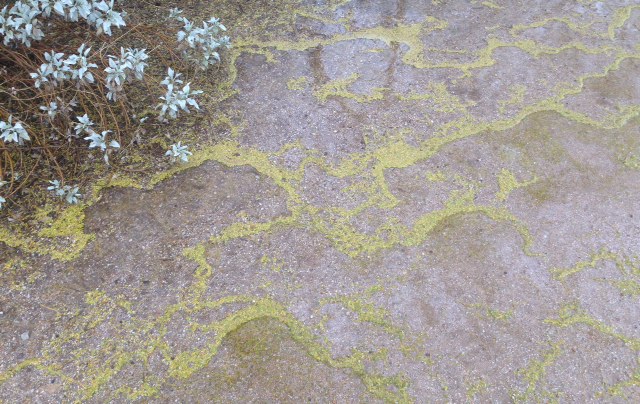 Tiny yellow leaves scalloped into a work of art by runoff.

At times the trail was more puddle than path, but I managed. No speed walking or jogging going on here. Just a slow meander. Sure my toes got wet as I knew they would so I’d put on wool socks and didn’t mind the damp at all.

I’m glad I ignored the to-do list this morning, threw on a hat over my sleep scruffy hair and spent an hour under rainy skies. Such moments happen rarely here and want savoring. Desert Autumn or Winter rains, whatever name it goes by suits me just fine. 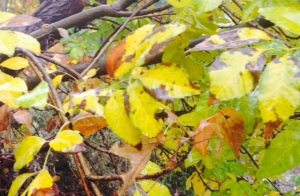 The gold up close, seems a bit worn and ready to drop.

“Some people walk in the rain, others just get wet.” ~Roger Miller 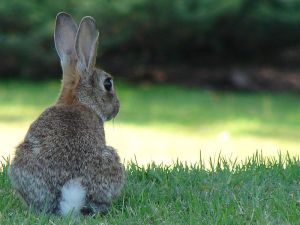 I’ve observed this fun play at the Riparian on my morning walks over the past few months. Two rabbits face each other, then one hops straight up while the other one runs under it. The hopper turns midair and lands facing the other rabbit who turns almost immediately upon running under. They repeat this behavior taking turns on who hops and who runs. It’s a bit like watching popcorn popping when several pairs are hopping and running in the same general area.

This fun behavior seems to have ramped up with the cooler weather. I’ve wondered what it all means.

At first I thought it was some form of Bunny Jousting. Or perhaps it’s where the name of the popular wedding reception dance “The Bunny Hop” came from. (Could be.) But I did what any self-respecting blogger would and engaged in a bit of research before making a fool of myself online.

Turns out it’s part of the mating ritual between a male and a female. Looks fun!

Since my video attempts came out grainy and unclear, I’ve included video someone else shot of the same behavior.

Given the amount of such frolicking and the frequency of the hopping going on over at the Riparian a bumper crop of bunnies ought to make a huge showing in about a month.

(If you’re really into Bunnies and all their nuances, this website has more information than the average person would ever need or want to know. But if you’ve got a son working on his rabbit raising merit badge, it’d come in really handy.)

After my acrobatic stair performance and subsequent recovery, coupled with a too long battle against Zombie’s taking over my lungs, I’m finally back to my morning walks.  I had missed that quiet time, I just didn’t realize how much I’d missed it until I stepped out of the car and set foot on the trail this morning. 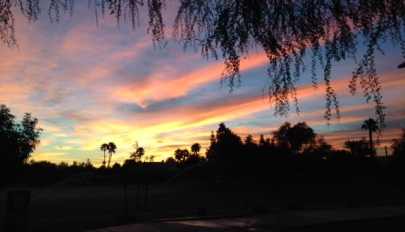 The biggest difference? Twenty degrees cooler! Last time I went for a walk the pre-sunrise temps hovered at eighty-three. This morning? Sixty-three! Glorious! Even once the sun’s southern-leaning rays reached my skin I didn’t feel overly warm or wish for a water bottle. Summer seems almost behind us now. (It still hits ninety-something during the day.)

Other differences I noticed included: 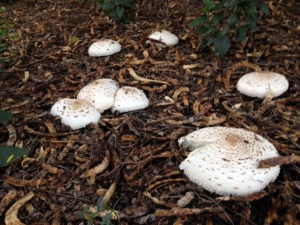 Mushrooms? Not normally in the desert! But yeah, two major rainstorms, nearly five inches the first time and two inches the second. A year’s worth of rain in one month did a number on our little dry patch of earth. Fungi popping up all over the place.

Green! More than normal. Every plant seems intent on growing faster and bigger than its neighbor.

Fewer rabbits. Not sure why. Too cold? Coyotes perfecting their hunting technique? They’re sleeping in and waiting for warmer late morning temperatures? 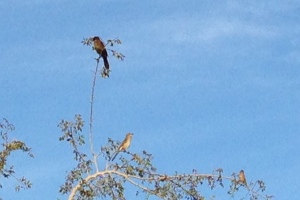 The birds seemed extra cheerful and more willing to sing out. Maybe that’s just a result of being away so long I’ve forgotten their sounds. I think they’re every bit as happy about the cooler weather as any other desert dweller, human or otherwise.

More night herons out and about. I had wondered all summer long if they’d moved on to other feeding grounds forever, but I saw more this morning than I’ve seen in the past four months combined.

Things that stayed the same:

My coyote friend still frolics in the tall brush of the dry ponds and watches from a distance as I watch back. I’d like to think we share a sort of connection, but I’m not fooling myself with that idea. 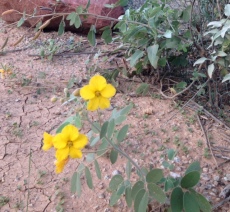 Yellow hollered for attention, too.

That creosote and mingled dust smell still permeates the air. Some people don’t care for it, but to me it’s the scent of wildness and quiet. Some days I go out of my way in the car to drive past with my windows open just to get a whiff of one of my favorite places.

Peace abounds and wraps itself around me as I walk. That, more than any other aspect of my morning ritual summarizes best what I missed the most this past month. Lacking a brush with nature, I stumble around off-kilter and unfocused. It’s not something I ought to neglect.

“This early piece of the morning is mine.”
~Wallace Stegner

It’s Gratituesday! On Monday morning I wrote up this little missive and decided to wait and share it with you today. It sums up my gratitude for this week quite nicely.

I forgot to set my alarm last night, but my brain knew when time to wake up arrived and rousted me from dreaming anyway. Good thing, too.

It stormed a bit overnight, so the humidity soared and the desert heat cooled somewhat. Remnants of clouds still hung out on the horizon in every direction. I got some picturesque shots of the sun and sky dancing like they do some mornings. Corals, golds, a touch of silver with an azure backdrop. 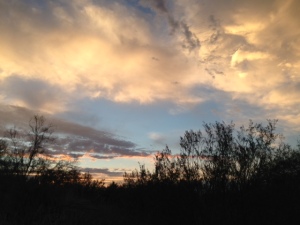 Besides capturing sunrise photos, I keep my eyes alert hoping to sight an elusive family or two of Quail, or perhaps my favorite bird the Night Heron. The Hummingbirds have been extra active lately zipping about catching insects. It’s a typical morning walk for me.

Until it isn’t anymore.

Off to the right in a small pond, stood my friend the coyote. I see him about once or twice a week in different spots throughout the Preserve. He was standing half in and half out of the water, looking intently into the bushes to the north. It would make a nice photo, so I stopped to line up a shot.

The coyote bounded like a rabbit toward the bushes, playful and boisterous. I’d never seen him do that before. Suddenly he raced back toward the pond edge. Then he wagged his tail and pounced forward again. His head and shoulders clearly searching the brush for a glimpse of something. A leap, a tail wag, and more bouncing. Then he kept his hind quarters up and leaned his front end to the ground, like a pup ready to chase a stick. He was playing a game with something in the bushes. 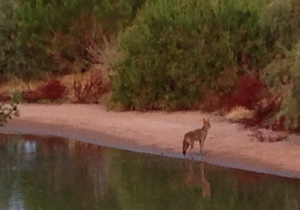 Oh, for a better zoom on my tiny camera.

I stood there mesmerized watching this coyote revel in a game he’d made up. Then, suddenly he pulled his tail between his legs and raced back to the water. Then he ran east, as if the game had come to an abrupt end. He wandered toward the back side of the bushes he’d been so interested in, when another coyote appeared. Larger, and looking somewhat menacing, ears back, body low to the ground and moving lower, as if ready to launch at some prey.

Uh oh. I thought. The younger coyote’s ears perked up, his tail wagged, he ran back and forth not ten feet away from the larger one’s attack stance. Then the ears perked up on the bigger coyote, the pup raced in large circles, jumping and dancing, prodding the other to play.

Mother and child. That’s what this was.

The younger coyote raced and raced, tail wagging, delight in every movement, until the older one slunk back into the bushes. They fell out of sight, momentarily emerging to race into the water briefly, then they were gone.

What a gift to see such wild abandon not a mile from my front door.

The rest of my ninety minute walk hummed with the joy of what I’d experienced. Sure, sweat dripped off my head and hair, ran down my back, soaked my clothes. And yet, a breeze blew down the path occasionally, working with the damp on my body to create a miniature swamp cooler bringing temporary relief from the morning’s desert heat. I welcomed every patch of shade offered, lost count of the rabbits and crossed paths with very few humans. I hesitated to end my walk even as the temperature rose and fatigue increased.

I didn’t want to let go of what I’d felt, what I’d seen in those rare and, yes, sacred moments between mother and child.

Nothing compares to that ephemeral time shortly before and just after the sun rises. The earth transforms from dark night to a brief otherworldly dimension of surprise and wonder.

Such a morning makes any shortage of sleep a very minor inconvenience and fills me with a sense of gratitude that ought to last a very long time.