Bouncing the basketball across the driveway to my son, I imitate a teen boy swagger and say, “You didn’t think I could do that one, did you?”

Standing where he caught the ball, he bounces it once, twice, tilts his head back, then lobs the ball with finesse into a full arching trajectory into the waiting hoop.

I step into the spot he just shot from, bounce once, bounce twice, tilt my head back, let the ball fly and watch as it ricochets off the rim and lands in a nearby bush.

“You’re still ‘H’,” I counter, as if his one missed shot were a significant point difference.

He usually won most of our games of H.O.R.S.E.  At least I had a modicum of a chance to win, where at a regular game of one-on-one, he’d always win. He was lighter, faster, more experienced and he had the added pressure of shame if you lost to your Mom.

When it comes to shooting hoops, I have no idea how my son felt about it. Young enough to not be too embarrassed about hanging out with his Mom, we had some good times. If he had other guys to play against, I was, of course, not particularly needed or welcomed. But given a boring afternoon or early evening, I was as good an opponent as any. I enjoyed the exercise. And it brought back some fun memories.

As a girl, how many times I had looked on as a giggling gaggle of girls watched a posturing bunch of boys playing a game of shirts and skins. I didn’t care for the gaggle. I always wanted to actually play.

Back then, I spent time practicing shots on my own when a basket and a ball were available, so that when the chance came around, I could pull my weight. Or at least, I’d have decent enough skills to make the basic shots in a game of H.O.R.S.E.

A great equalizer, the game of H.O.R.S.E. pits young against old, short against tall, talented against beginner. The rules can be tweaked to accommodate more than two players, make concessions for weaker players, give everyone a chance to enjoy and feel like there’s a chance, however slim, of winning. Or consummate players with incredible shots in their repertoire can wow onlookers and hone skills.

The ball lends itself to contemplation, the tiny round dots on the surface of the ball mesmerize and calm. The feel of the rubber, smooth and sticky, firm and pliable, relaxes your hands. The reverberating echo of the ball as it hits the concrete, bounces back into your hands, over and over and over, in a hypnotic lull.  Then there’s the smell of dust on the ball mingled with a sheen on faces and the slight tang of sweat. 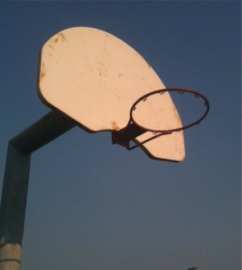 There’s something about the kind of conversation that goes on during a game of H.O.R.S.E.. Talk simply evolves. Words slip out more easily. Chatting happens about things that would never get discussed around the dinner table.

The hoop, netted or not, calls out, taunts, whispers. Again, again, again, just one more time, and one more. One more shot, one more game, one more bounce.

If you’ve never played a game of H.O.R.S.E. you can find the rules here. If it’s been a while since you’ve picked up a basketball maybe it’s time. Maybe running your fingers across the texture of the ball, letting it bounce beside your feet, tossing it between one hand and the other, sending it flying toward ‘nothing but net,’ is just what your soul needs today.

Needing to ramp up your Basketball Lingo? Here’s a great spot for a refresher.

I need to sound really cool, like I know the game in my sleep!

I’m not familiar with this game you’re talking about

One thought on “Forget Sweet Sixteen, It’s All About H.O.R.S.E.”